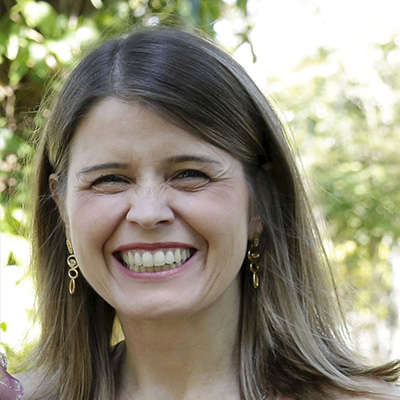 Larissa Loures is a Brazilian AI Practitioner, administrator and psychologist who met David Cooperrider in 1996, just after having finished her BA International Business, at Anglia Ruskin University, Cambridge. At that time David was invited to apply the whole 4Ds circle of AI at her family’s company, Nutrimental. Cooperrider encouraged her to visit the TAOS Institute and to learn more about AI under his and Diana Whitney´s orientation. From then on, Larissa worked as Junior Consultant, directly with David Cooperrider, in several projects, including URI (United Religions Initiative), BAWB (Business as Agent of World Benefit) and programs offered by FIEP. After some years dedicated exclusively to her family, she graduated in Family Counseling – a program offered in partnership with the Chicago Center for Family Health.
She studied Psychology and graduated at the Pontifical Catholic University of Paraná (PUCPR). She has been working with individuals, families and organizations. She is member of the Advisory Board of the David L. Cooperrider Center for Appreciative Inquiry and CEO and founder of the Instituto Educação Positiva (IEP), that aims at giving support for high quality implementation of Positive Education programs. Larissa feels gratitude for playing the role of Ambassador of the World Positive Education Accelerator (WPEA). Currently, she has partner with Dr. Alejandro Adler to design and build a Pilot Project to scale Positive Education by blending both Positive Psychology and Appreciative Inquiry to help accelerate Positive Education in Brazil and Latin America.